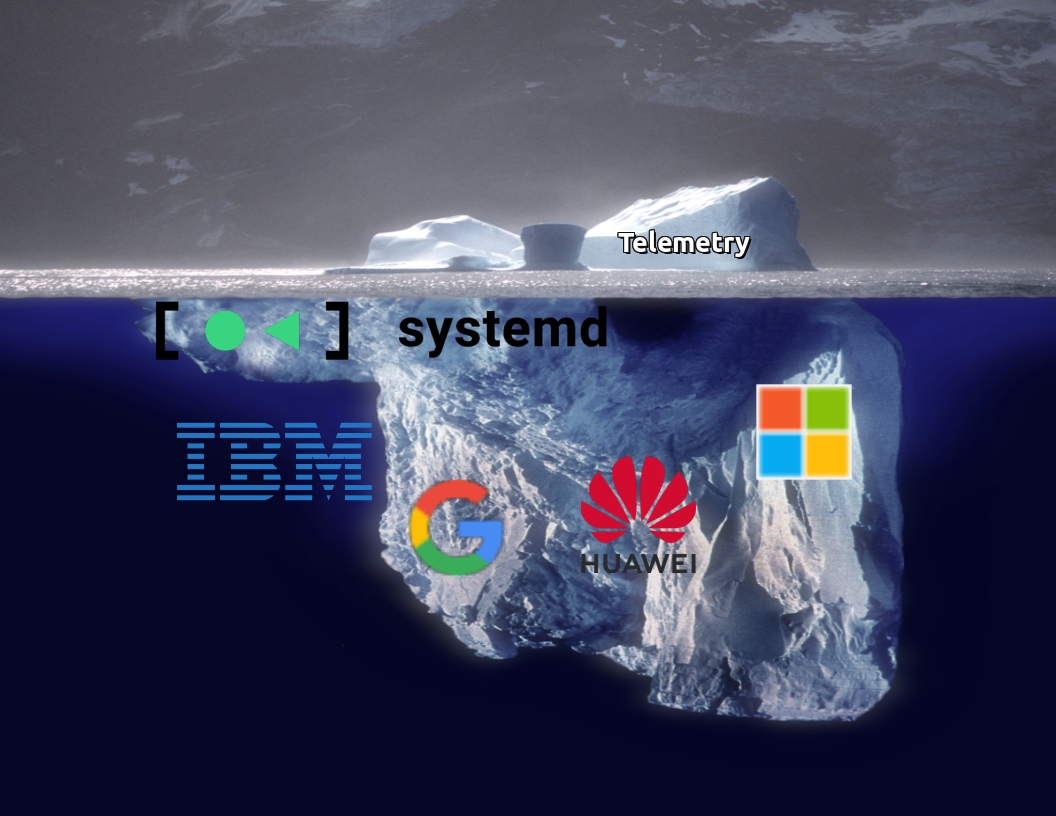 Is this the Linux iceberg? (photo by Uwe Kils, with modifications)

As we wrote in our last article, the Linux operating system, differently from MacOS, iOS and Windows, has several different desktop environments, that is, the graphical elements which you interact when using a computer: the windows, the taskbar, the buttons, etc. You can choose one Linux distribution and use it with the desktop you prefer, according to your taste. Plasma, developed by KDE, is a desktop environment, which many say it is the one having the nearest graphical similitude with the Windows desktop.

Recently, there was a debate on PCLinuxOS’ forums about KDE Plasma’s implementation of telemetry through KUserFeedback. While in PCLinuxOS we can remove it without any collateral effects to the system, other users reported that doing the same in other distros (like Debian 11) results in the complete removal of KDE Plasma! Why to force such an implementation, if, as KDE’s developers say, it is just an innocuous, privacy-respecting measure?

Coincidence or not, in the past years many popular Linux distributions started rolling out optional telemetry. Then it was the time of computer programs: news broke out on May regarding Audacity, a popular audio editing app, which announced the start of the use of telemetry. The move was finally pushed back after users revolted against it.

But in Plasma’s case, it is not just an app or a single distro, but an entire desktop environment, employed in several Linux distributions, that is being shipped with telemetry. While many point out that the data collection is by opt-in and entirely anonymous, others have found that, even if you don’t activate telemetry, data is still collected, using computer resources, registering “apps and boot, number of times used and duration in /home/user/telemetry folder.” As such, they argue that, because of the way Linux permissions work, other programs could have access to these log files. KUserFeedback’s FAQs page confirms this:

KUserFeedback is designed to be compliant with KDE Telemetry Policy, which forbids the usage of unique identification. If you are using KUserFeedback outside of the scope of that policy, it’s of course possible to add a custom data source generating and transmitting a unique id.

Not being an expert on such matters, it is anyway a little strange the step taken by KDE and the way it is being implemented by most mainstream distros, as if there was a certain concertation about it. To better understand the picture, let us give a look on the organization that maintains the Plasma desktop.

Most people know KDE because of its Plasma desktop environment, its applications and its community. Few have ever observed that, at the bottom of their website, there is the indication of an organization called KDE e.V. If you click on it, you will find out that the desktop and the apps are all property of this non-profit organization based in Germany. So far so good. It is always nice to have a legal framework to protect software development. But, as in any organization, you need money to run it. For it, you need supporting members: little ones, which, in KDE’s case, must donate at least one hundred euros, and the corporate ones. Large corporations must pay a yearly fee of ten thousand euros (roughly US$11,700), and are then called “patrons”. Among KDE’s patrons are Google, Canonical, SUSE and Qt. Now things start to become clearer! Here is Google again on the scene, with Canonical and SUSE! And the last two have also implemented telemetry on their systems! What a coincidence!

But this is not all. Because, when you have money, gates are fully open to you! When you are a patron, you automatically join KDE’s advisory board. Among board members, we have: Debian (funded by Google and HP Enterprise), Canonical, SUSE (both funded by AWS, Google, Huawei, Microsoft and IBM), Qt and the Open Source Initiative (which is also funded by Google and IBM). Oddly, Google disappears from the board, but it is always on the backstage. But now one can understand why you cannot remove KUserFeedback from Debian without removing Plasma: they are among the ones who decided it and are backed by Big G.

The Tip of the Iceberg?

It is not from today that big corporations have started to take over the Linux ecosystem. Acquiring stakes on companies and donating to non-profit organizations, they have gained a highly privileged access to the decision-making level of many (if not most) structures related with Linux development. Now we are starting to see some of those fruits. For the moment, systemd and some optional telemetry. Perhaps tomorrow, systemd and telemetry by default with some hidden opt-out. And someday we risk seeing – too late – that most Linux distributions have converged to the same positions now held by Apple, Google, IBM and Microsoft, because they have become just another tentacle of them.

Another version of this article was published by the PCLinuxOs Magazine, a great magazine for the best Linux distribution: PCLinuxOS!